CONFORMING TO THE WORLD

Posted on June 27, 2015 by highlandlakeschurchofchrist 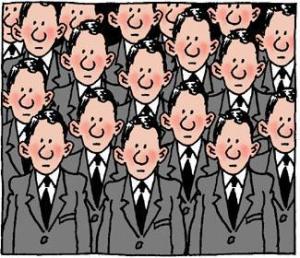 One of the most horrific crimes in the history of Israel took place in the days of the weeping prophet Jeremiah. The people built “the high places of Baal, to burn their sons with fire for burnt offerings unto Baal” (Jer. 19:5). How could God’s people have done something this barbaric?

The Lord had warned the Israelites hundreds of years before Jeremiah “do not follow the crowd in doing wrong” (Exod. 23:2). They were not to follow the ways of Egypt were they had been or the customs of Canaan where they were going (Lev. 18:3). In spite of all the miracles they had seen, they were subject to peer pressure.

Not long after they entered the Promised Land the Israelites gave in to the temptation to be like others. When Joshua’s generation died, “another generation grew up, who knew neither the Lord nor what He had done for Israel. Then the Israelites did evil in the eyes of the Lord and served the Baals” (Judges 2:10-11). This apostasy set the stage for the book of Judges. For the next 450 years the Israelites again showed their desire to fit in with others. They demanded a king so that they could be “like all the other nations” (1 Sam. 8:20). God gave them a king, and the most prosperous king let his foreign wives influence him to go after idols (1 Kings 11:4-7). When the nation divided and Jeroboam gave government sanction to idolatry, the worship of heathen gods became entrenched in Israel. Though the temple remained in Judah, pagan worship became so common that by the time of Jeremiah the people were actually sacrificing their children to Baal.

It is easy to see that the people of Judah were influenced by others. We are so far removed from the situation that we quickly perceive where they went wrong. We may think that people today are so aware of more recent atrocities like the holocaust that nothing remotely similar could happen today again. But those thoughts vanish when we open our eyes to the real world. Compromise is gradual, but the damage it causes is permanent. Our culture has been in a state of decay for several generations, but many have been too busy to notice. Many have been too selfish to care. Now our civilization is crumbling before our own eyes and we feel powerless to keep it from falling.

Should we be surprised??? Some in our land wanted sexual liberation in the 60’s and 70’s, and now we have same-sex marriages. They wanted freedom of choice, and 56 million babies have been massacred as a result. They wanted tolerance and diversity, and now there is jihad. They said we must teach evolution to meet academic standards, and now they have no standard of right and wrong. They have fallen into the age-old trap of following the “crowd” or multitude, to do evil.

Not everyone in Judah bowed the knee to Baal. Jeremiah, Josiah, and others went against the flow. This was hard for them and it will be hard for us, especially when we have to stand against friends, family, and even brethren and sisters in Christ. May God give us the strength to follow the straight and narrow path that leads to eternal life. ~~ BULLETIN DIGEST — Kerry Duke, West End church of Christ, Livingston, TN