Posted on November 10, 2012 by highlandlakeschurchofchrist 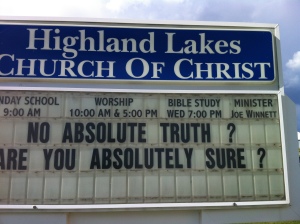 The way information is processed and is passed evolves over time. From word to mouth, letters carried by the Pony Express to the latest blurb found on the internet, the way information is effectively shared and received continues to develop day by day, year after year.

In the early days of newspapers, when newspapers were the primary method of delivering the news, when something big had occurred, the publisher would not only publish the usual daily paper, but would also publish an “Extra”. The extra newspapers were sold on the street corners, often by newsboys, who had a stack of papers and would sell them to those who passed by. When an “Extra” was published, the newsboys would call out loud “Extra! Extra! Read all about it!” to call attention to the fact that something big had happened, and that an extra bit of pressing news had been published.

How do we go about sharing the Good News of Christ? How do we go about communicating Christ in a post-modern and, as some would express it, a post-Christian, culture? What is effective? What is not? What was once effective but no longer is? How do we adapt? It has been said that the definition of insanity is doing the same thing over and over again, believing a different outcome will be the result. But that never happens. Now the message of the Gospel remains the same. But how do we go about carrying out the mission of Christ in the contemporary world we find ourselves in? Sound discussion has taken the place of fierce argumentation. However, many today ask the question: “Is there really anything that is worth discussing?”

Christianity has always existed as a culture within a culture. Being mission-minded people and effectively carrying out the mission of Christ entails both a striving after the Kingdom and an understanding of the environments in which we find ourselves a part.

The Apostle Paul affirms, “I have become all things to all men, so that by all means possible, I might save some” (1 Corinthians 9:22). Same message. Differing methods. No one has all the answers. But I believe asking the questions is a step in the right direction.  ~~ by Jason Reeves, West Erwin church of Christ Tyler, TX

This entry was posted in Front Page and tagged christian culture, communication, gospel. Bookmark the permalink.